So this does mean the end (or at least, pause) of Jupiter Hollow, but it also means the renewal of Tanith Rowan Designs and the beginning of Parlour Duck crafts.

This blog will remain, and we may come to use it for future endeavours if the time and opportunities are right. But the majority of new stuff will be at the new blogs.

So I will be at the new Tanith Rowan blog, talking about hats and soft toys and soft toys in hats and maths nerd stuff and all things Christmas and Halloween and whatever else takes my fancy. (You can also check me out on Facebook.) I started off the blog with a post about the lessons I've learned since I first started up an etsy store with the dream of selling hats. You can also read about my in-store debut at the Crago Mill in Bathurst. In the coming weeks you can expect to see some new fabric designs, new hats, and more thoughts about creative business and motivation.

Rhiannon will be at the new Parlour Duck blog, with all her amazing embroidery and crochet, as well as more looks at vintage patterns and recipes - not to mention cute and gorgeous baby things as she gears up for the arrival of a tiny new person in November.  Some things she is working on to look forward to include the start of fabric designing, Christmas ornaments, more gloves and projects from year 2 of the Embroiderers' Guild course.
Posted by Tanith at 18:00 No comments:

A weekend of blocking felt

Last weekend I found myself for once with hardly any commitments so I spent a couple of lazy afternoons with a kettle, blocks and pins and turned out some little hats. 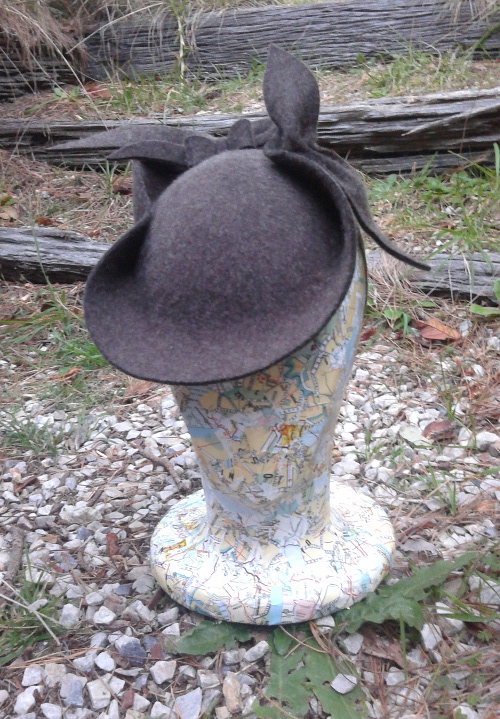 This is a copy of the one I made last year for a lovely colleague. I learned that although it helps a lot to have a vague idea to work towards, an exact copy is difficult and annoying! Felt just wants to move the way it wants to move, and that won't be the same twice in a row.

With some of the leftover felt from that one, I churned out a little pillbox hat. Don't have a pillpox block? Me neither. But I do have a cylindrical plastic pasta container. It worked like a charm. Just use rubber bands to hold the sides in place as you steam and stretch. 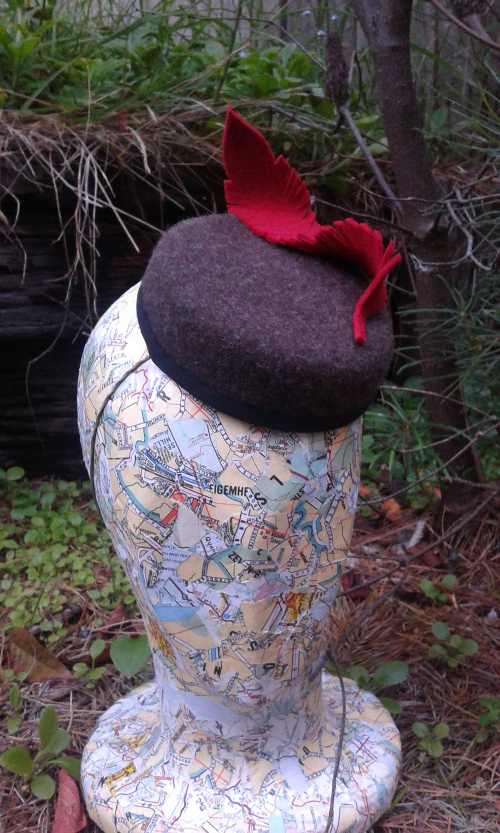 I want to move away from using feathers, but I've seen some beautiful vintage hats with felt feathers, and with a bit of guidance from this paper feather tutorial and pattern, I used some of the scraps from previous hats to make some.

This next one is from leftover felt too. It wasn't looking quite right without any trim, so I added some more feathers. 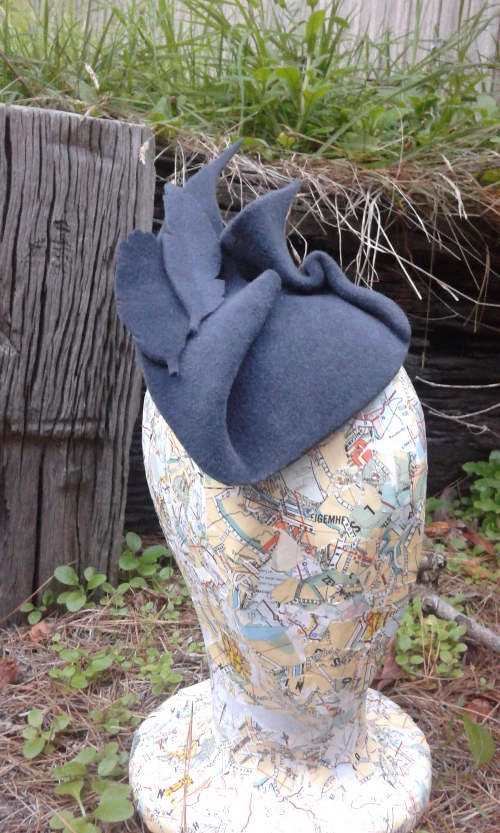 As well as my craftsy course, I've been reading some blog posts about improving photography, and also playing with effects. 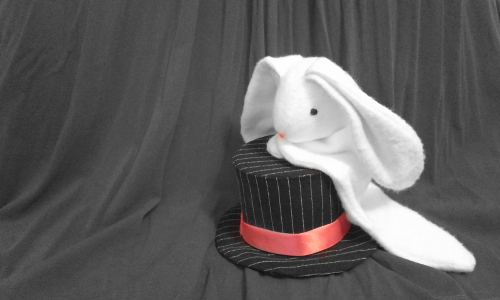 These are selectively coloured using PicMonkey and following this tutorial by Abby Glassenberg. 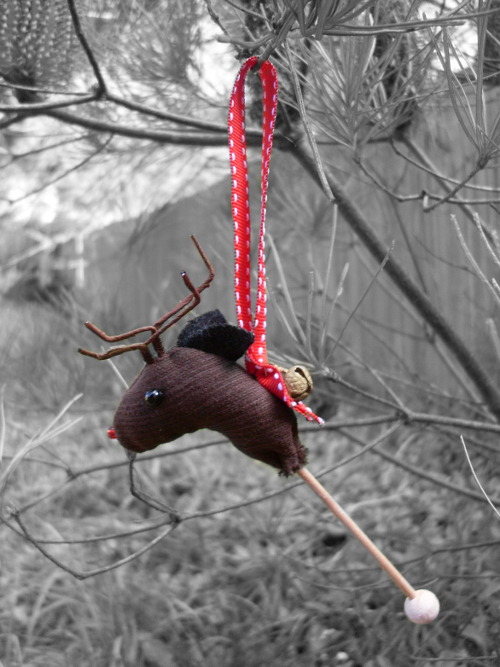 I haven't used PicMonkey before but this was very easy and lots of fun.

It makes for nice portraits of my babies too. 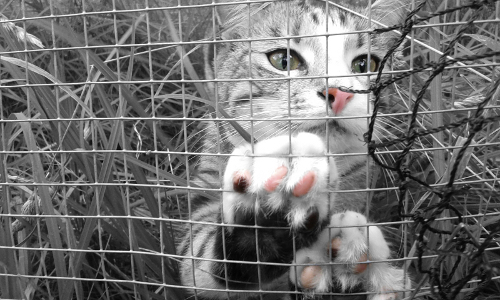 We don't keep our cats in cages, despite appearances. They are in their run, enjoying the outdoors without being a menace to the native wildlife. 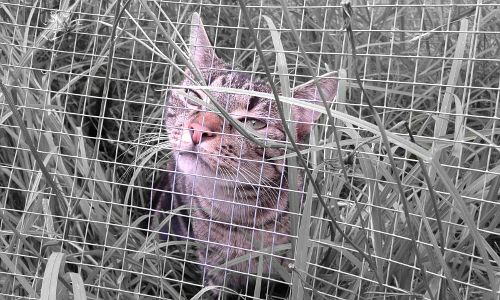 I recently joined a little 'club' called "Six Months of Softies". Basically it's six soft toy patterns from six different designers, but they are new exclusive surprise patterns revealed and delivered once a month for six months, so it's exciting too! I'm a sucker for soft toys, what can I say? (Read about it here, if you are interested.)

The first pattern is from Shiny Happy World, where Wendi Gratz designs patterns specifically for beginners and also has a heap of video tutorials to go with her patterns. So when reading through the pattern, there will be links to videos as you might need them. You can ignore the stuff you already know, and check out the video for extra help on stuff you aren't good at or familiar with. I've picked up some good tips. I also love the way she writes. Cute little comments lie among the instructions to give you a little laugh.

The pattern is an elephant and a mouse, called Napoleon and Josephine. I've actually mostly made the elephant, but I need more stuffing, so I'll show you that one later. For now, I have the mouse. 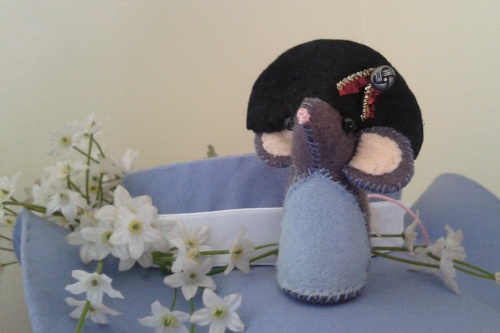 As you can see, I decided to give him a little hat.

Want to make your own little felt bicorne for your mouse or another little toy?

It's super easy to make. Slightly more tricky to place, depending on the ears of your toy! Here's how:

1. Start with a circle of felt that is a suitable size for your toy. The diameter should be "shoulder width" or wider for a more exaggerated look. (I say "shoulder width" in inverted commas because often toys have no shoulders. This mouse doesn't even have arms.) Basically there will be two folds in the circle, making two segments slightly smaller than a semi-circle for the sides, and a narrow strip in the middle. Kind of like a stand-and-stuff taco.

2. Fold into taco shape, and pinch the sides in and fold them down a bit. Now, I had a go at actually steaming mine to help it keep that shape. I used a cheap craft felt from my stash, so it was only moderately successful, but it might be worth it, especially if you are making a larger hat. You can see my improvised blocking set up in these pictures. 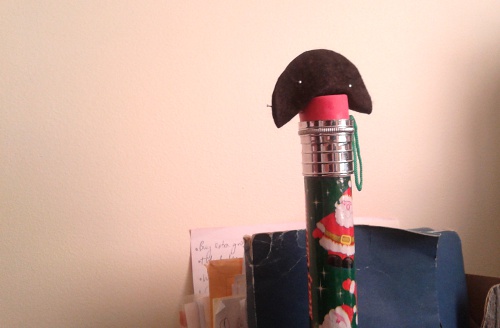 I knew I was keeping that oversized novelty Christmas pencil for a reason. 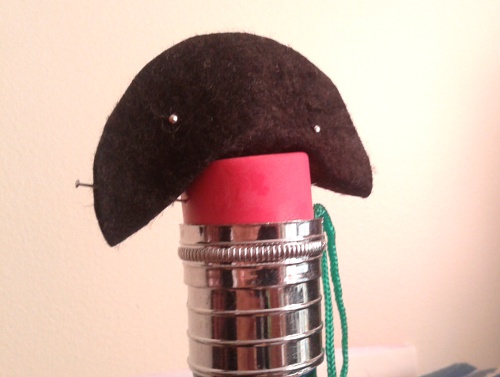 If you haven't steamed any felt before, the idea is to hold it in steam and shape it when the steam has made it a bit more pliable, then keep it in place. Holding it above a kettle is the easiest way. 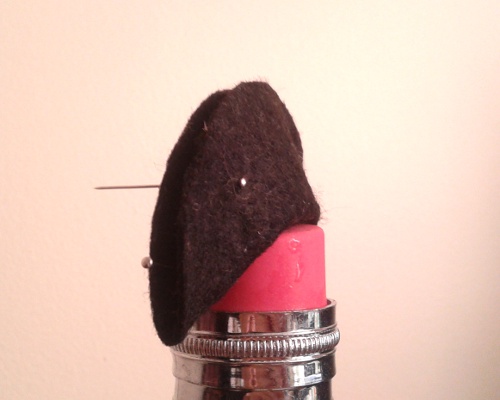 3. Embellish. I went with a little button and the edges of some wire-edged ribbon in gold and red. Google up some Napoleon pictures for plenty of ideas. Some paintings seemed to have a gold trim, others just a little cockade. Whatever you fancy. Googling other bicorne hats (or chapeau bras) will give you other embellishment ideas. 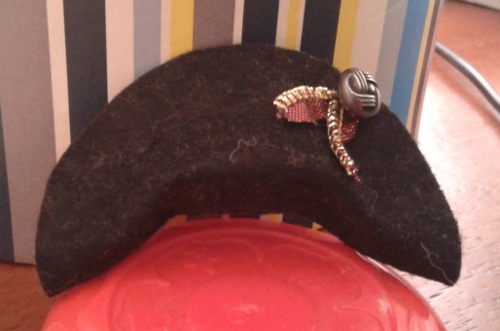 4. If necessary, also put a stitch in on the other side to hold the shape. 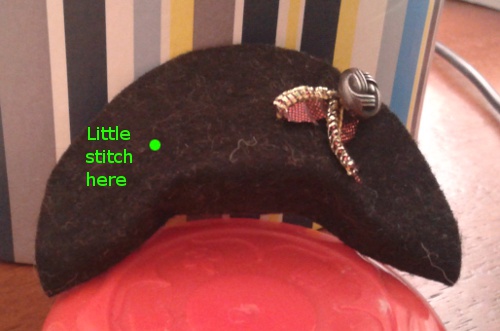 5. Attaching is a variable process depending on your toy. For the mouse here, I used a ladder-whip-mutant stitch to attach it behind one ear, across the top of the head, and in front of the other ear. Wiggling and squishing was required. 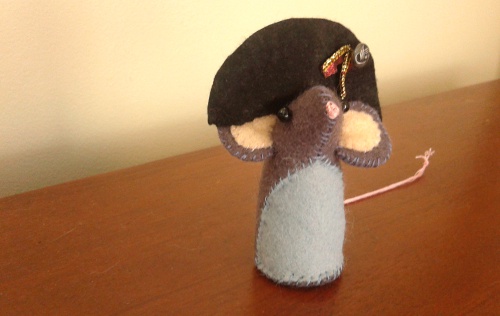 6. Celebrate with some fresh banana bread. 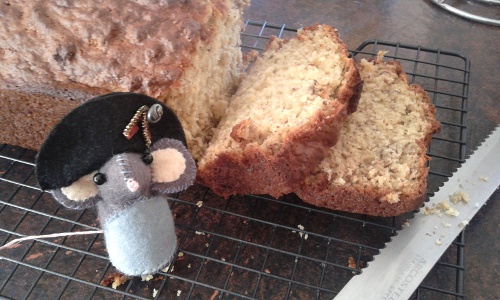 Wardrobe planning, continued - A Matter of Defining my Style

In a previous post, I talked about how I was trying to restructure my wardrobe in line with function - so deciding how much of my day I spent doing what, and how that should be reflected in my wardrobe. While that approach is very useful, especially as a way to see what areas you really don't need any more items of clothing, it does have limitations. Rather obviously, knowing that you need more 'work formal/dressy' clothes, as I have realised I will, doesn't help if you don't know what clothes fall in this category. And while I could default to my jeans/t-shirt combination for everyday casual, with cardigans/sweaters added for cold days, I've been working on changing this for the past year. (As it happens, the job I got as a 'normal', non-academic job is in retail, where I'm still allowed to wear jeans, and have uniform shirts, so no thinking is required for work clothes. This lets me concentrate on my everyday outfits. )

These questions are a matter of style.  What clothes do I want to wear? What sort of image do I want to project?

Confession time: I can't help myself. I'm addicted to style help books. If a book promises to tell you just what clothes will suit, or just what every woman needs in her wardrobe, or just how to get the most out of what you own - I can't resist. I have read so many blogs, websites, magazine articles and books on the topic. Yet I was still having trouble articulating my style. One book I read said that you should be able to encapsulate your style in a sentence; another said in three words. This gives me flashbacks to working on the thesis - sum up your thesis in three sentences! One sentence it is.

So I'd like my style to be comfortably ladylike with a quirky, vintage edge.  And currently it is very casual with occasional retro, ladylike accessorizing.

I think the key to upgrading my current casual style to where I'd like it to be will come in three parts:
1) Fit and quality. I can still wear a jeans/t-shirt/cardigan combination and achieve my goal, but only if the jeans are neat and fit well, the t-shirt doesn't have a slogan and isn't baggy, and the cardigan isn't pilling and is also the perfect fit.

2) Accessories. I own quite a few, I have plans for more, but I tend to wear them only occasionally, when something is happening to make me go the extra distance. I need to start wearing them on a more regular basis.

3) More skirts and dresses. I do tend to live in jeans most of the time, because it is the easy option. I need more skirts that coordinate with the rest of my wardrobe, and more dresses that are suitable for day-wear rather than special occasion wear. Or I need to rethink how I view the dresses I own, to believe they are ok for day-wear.

So these are the guidelines for my wardrobe planning and clothes projects in 2013 and 2014: clothes that fit beautifully, accessories, skirts and dresses.  Quite a task!
Posted by Rhiannon at 09:08 2 comments: 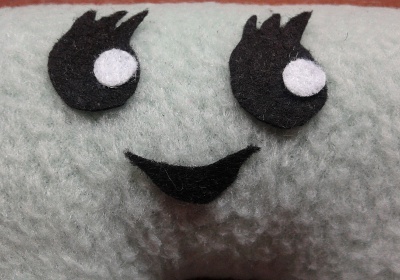 They belong to a soft toy pi symbol I made for a friend and fellow maths teacher for her birthday. I had to wait until it arrived before I could show you. 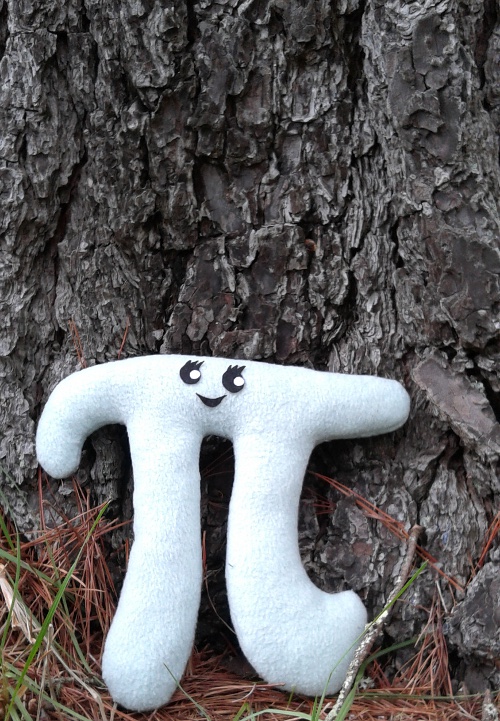 I've made some before, but this time I think it has turned out even better, thanks to a nice fleece, firm stuffing and some cute felt eyes. 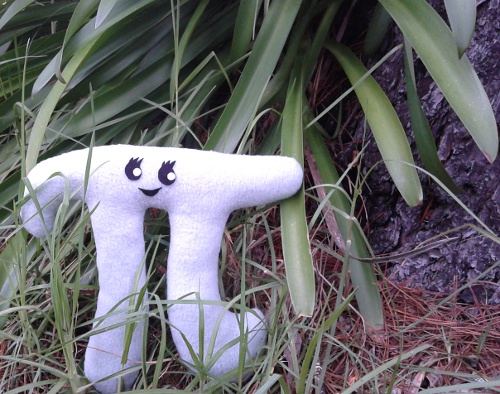 Rhiannon came up for a few days to my place and we've been planning and crafting and brainstorming!

I found an idea in "100+ Ideas for Teaching Thinking Skills" by Stephen Bowkett that I thought would be fun to try.

Basically you make two lists of key ideas or themes, randomly combine two, and think about what the crossover would be. We did a list of items you could make and a list of themes. Then we rolled dice to get a random combination each and came up with a design idea.

It was fun and challenging. Like most things, the combinations that seemed the most challenging ended up being the most fun and producing more unusual ideas.

I was hoping we could use this to come up with actual usable ideas, but some of our designs fell outside our areas of expertise. I think it was good for our brains regardless. It could certainly be adapted in other ways that would focus more on our crafts and interests.